In 1956, General Electric (GE) constructed the original 161,000sf facility, situated on 96 acres in the center of Pinellas County, formally known as Bryan’s Dairy Farm. GE sold the facility to the Atomic Energy Commission (AEC) in June of 1957. In return, GE was awarded a contract to operate the facility for 25 years. The facility became known as the Pinellas Plant. The sole intended use of the facility was to house the engineering, development and manufacturing of components supporting the nation’s nuclear weapons program.

The AEC was abolished in the 1970s and the Department of Energy (DOE) assumed responsibility for the nuclear weapons program. Over three decades of operation, the facility’s total square footage expanded to approximately 750,000 sf. In 1992, after the end of the Cold War, the DOE formally announced that the Pinellas Plant would be closed in 1997. In that same year, GE announced that they no longer would continue as the prime contractor. The DOE awarded the contract to Martin Marietta. In 1994, Lockheed merged with Martin Marietta and became Lockheed Martin, who continued as the prime contractor.

From 1993 through 1995, the DOE and local public and private entities struggled with decisions either to bulldoze the entire site or to redevelop the facility. In January 1995, the DOE chose redevelopment. The Pinellas Plant Community Reuse Organization (CRO) was created with a mission to oversee the transition of the facility. The CRO was the first such organization to be chartered by the DOE and given administrative support by the DOE and the Pinellas County Industry Council (PCIC), a State of Florida chartered organization responsible for the economic development of Pinellas County. At that time, the CRO and DOE entered into a cooperative agreement that provided direct funding from DOE for the CRO’s administrative and programmatic activities.

In March 1995, the DOE sold the Pinellas Plant to the Pinellas County Industry Council (PCIC). The sale of the facility included the real property and 50,000 pieces of personal property, which included analytical laboratory, machine shop, office, and various manufacturing equipment. The name of the facility was changed to the Pinellas Science, Technology and Research (STAR) Center. The PCIC used the personal property as incentive to lure tenants to the STAR Center. The DOE remained on-site as a tenant through December 1997 to complete required industrial clean-up activities. When Raytheon Company became the STAR Center’s anchor tenant in August 1998, a successful transition was in sight. 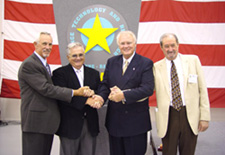 Today, the STAR Center is home to dozens of tenants that employ approximately 1,400 workers. The Center’s total workforce exceeds the workforce employed at the facility before DOE’s plant closing announcement. From 1998 to the present, available acreage has been developed and the facility’s current occupancy rate is over 87%. The facility is self-sufficient and operates on the revenues generated from rent. The facility has never received funding from the County’s general fund. As a federal facility, the facility was not on the County tax rolls. Now, all for-profit companies pay property taxes for space leased at the Center.